Google Pixel vs. Pixel XL: Which should you buy?

Google Pixel vs. Pixel XL: Which should you buy? Here's the difference between the Pixel and Pixel XL.

Unlike last year's Google event, which revealed two different Nexus devices developed by two entirely different manufacturers, this year's Pixel and Pixel XL are both made by Taiwan-based HTC. As a result, they both look quite similar—so much so, that from far away, you can't really tell them apart, despite their differing screen sizes.
The biggest difference between the Pixel and Pixel XL are their display and battery sizes, though the 5.5-inch Pixel XL isn't that much larger than its 5-inch sibling. The Pixel also feels more like a refined, matte HTC One A9, while the Pixel XL sits in the hand as comfortably as the OnePlus 3. But no matter which one you pick, both devices have high-quality AMOLED screens that are both vividly colored and plenty pixel dense for the average smartphone user. 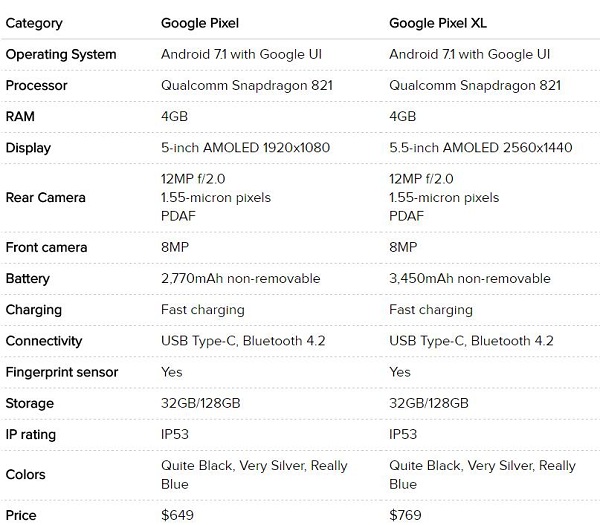 Which one is better?

Well, let's weigh the options. The Pixel features a regular 1080p AMOLED display with a 2,770 mAh battery, so chances are that its battery life might manage a longer day than the Pixel XL's Quad HD AMOLED display and 3,450 mAh battery simply because the display doesn't require as many resources. Then again, larger batteries do usually manage longer up-time.
Here's more on battery performance from executive editor Alex Dobie's initial review of the Pixel and Pixel XL:
In both cases you're likely to get a decent, full day of use out of the Pixel and Pixel XL, though the XL fares a little better on heavier days.
The XL never failed to get me through a full day of regular use, with a typical day getting me 14 to 16 hours off charger with 4.5 to 5 hours of screen on time. That's with mixed use across LTE and Wi-Fi, and approaches what I've gotten out of the Galaxy S7 edge earlier in the year. Unremarkable for a high-end Android phone perhaps, but the major difference I noticed with the Pixel XL was how it weathered heavy use that much better than many rivals.
It all comes down to whether you want a phone to be usable in one hand, or one that can double as a small tablet, used with Nougat's new Multi Window mode in landscape with two apps side by side. You're still getting the same Qualcomm Snapdragon 821 processor, coupled with 4GB of RAM and the improved 12-megapixel rear-facing camera, as well as rear-facing fingerprint sensor, USB Type-C, and fast charging. Both phones are also IP53 rated, so you don't have to go into freakout mode if either phone gets rained on.

It's a good idea to buy a Pixel XL over a smaller Pixel if virtual reality is your primary concern. The Pixel and Pixel XL are both Daydream-ready, but the larger Pixel XL has a higher-resolution display, which translates to better per-eye density in VR. This gives the XL a definite advantage for current content and it helps with future-proofing as well. The larger battery may also eke a few more minutes in battery life while playing VR, which is nice.

Recommendation: How to Play iTunes movies on Google Pixel and Pixel XL

Step 1. Install and launch the program on your  Windows ( or Mac version) . Click Add Movies to import the purchased or rented movies to it.
Step 2. Select output format from profile drop-down list. Here you can choose Customize WMV/VOB/MP4/MP3/AAC, etc. And we can set Lossless MP4 by default.
Step 3. Click Profile blue panel again.The iTunes to Google Pixel conversion will begin automatically.

How to Play iTunes Movies on Google Pixel on your Mac